This site is made available by the Belgian free flight association, who owns the start and obtained the landing areas. Support the actions of the BELGIAN FREE FLIGHT ASSOCIATION by becoming a member, so that this site can survive and other sites can be opened.

Use : Hang gliding – Paragliding (not motorized)

Open: All the year except on hunting days (see http://www.bvvf.be or signs at the entrance of the forest).

The three conditions for flying at the Beauraing site are:

If you are member of a foreign association, it is mandatory to include a copy of the following documents in pdf-format:

Sensitive and fragile site! Compliance with the rules set out in this document is essential to the survival of the site.

The pilot flying on the Beauraing site, whether with a distance objective (XC, IPPI level 5) or with a local objective (BP, IPPI level 4) undertakes to:

By flying at Beauraing, you unconditionally accept all of the rules above!

In exchange you will receive a sticker at your first visit. This sticker acts as an access card and must be worn visibly and in all circumstances on the starting place.

The rules and the flight plan must accompany you on the start. In the event of a serious breach or repeated misconduct, your access (card) will be withdrawn.

The local club, Les Mousquet'air, located at Ferme Sainte-Marie, 11 in 5570 Beauraing will ensure compliance with the rules and moderation on the field.

Your collaboration is essential if we want to maintain this site for many years to come. 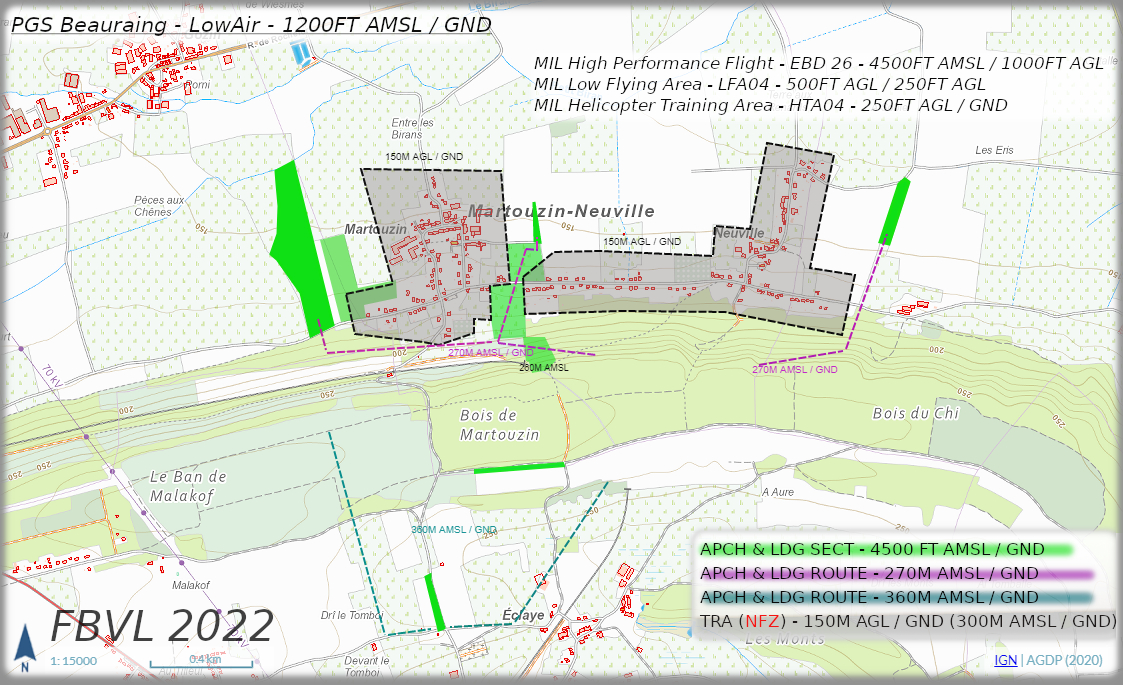 To be scrupulously respected!

This flight plan is a support for pilots but also for negotiations with the municipality and the authorities.

It provides the information:

Under no circumstances do they guarantee to arrive safe and sound, without incident, on the landing fields. The decision remains the responsibility and judgement of the pilot.

It is forbidden to fly over the electrified railway line at a low altitude ! Mortal danger !

Prepare the gliders on the road behind the start and don't obstruct the start.

A local flight is any flight during which at least one landing remains in sight of the pilot. As VFR-flights in uncontrolled airspace (Class G) are limited to 4500 Ft AMSL outside the controlled airspaces and during the hours of military activity, the use of the Beauraing site justifies on its own the required pilot level (see chapter Site rules).

During local flights, from the ground to the maximum altitude of 4500 Ft AMSL, you will encounter following areas:

Consult the NOTAM’s and AIP on the Skeyes website (https://ops.skeyes.be/) to get the necessary information regarding these zones and their activation times!

Regarding airspace rules, the use of the site for cross-country departures and the flight that follows is the responsibility of the pilot. Performing this type of flight justifies the level required by the site rules (IPPI card level 5).

Respect the quietness of the forest and the local residents and do not shout ! 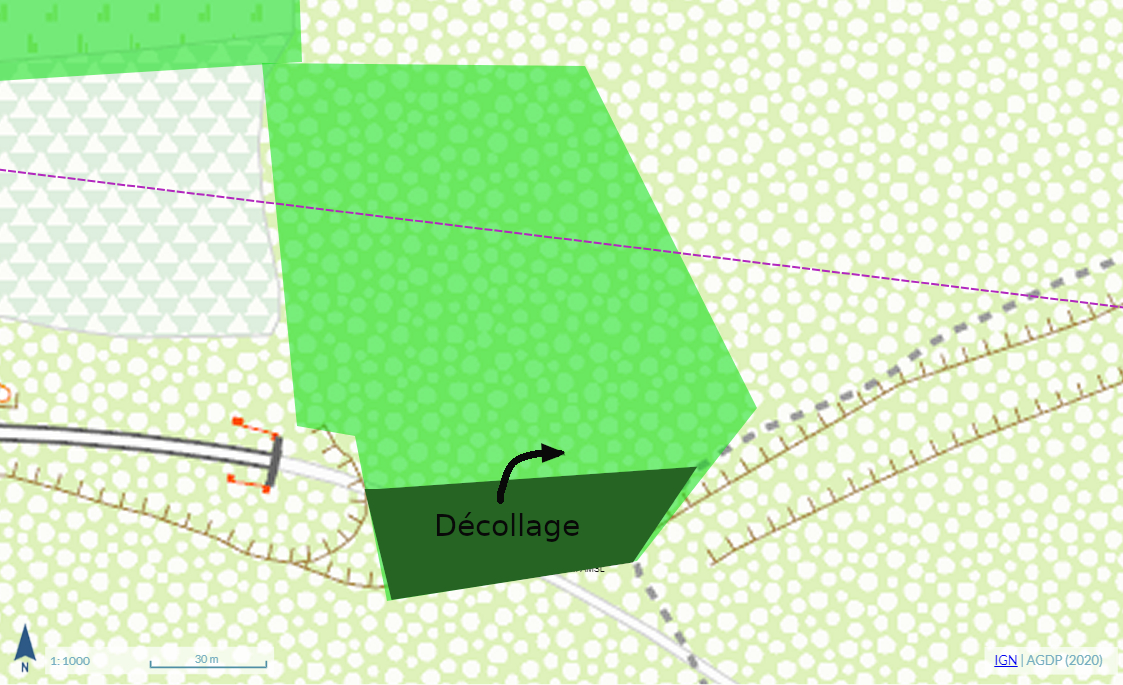 Just after the start is REQUIRED to turn to the right (to the East). The start can be very turbulent and a flight incident above the electrified railway line could be disastrous, both for the pilot and the site.

Prepare the gliders on the raod behind the start, do not clutter the start.

Beware of the NFZ, low level flights ( < 150 m AGL) above the roofs ans private properties must be avoided ! 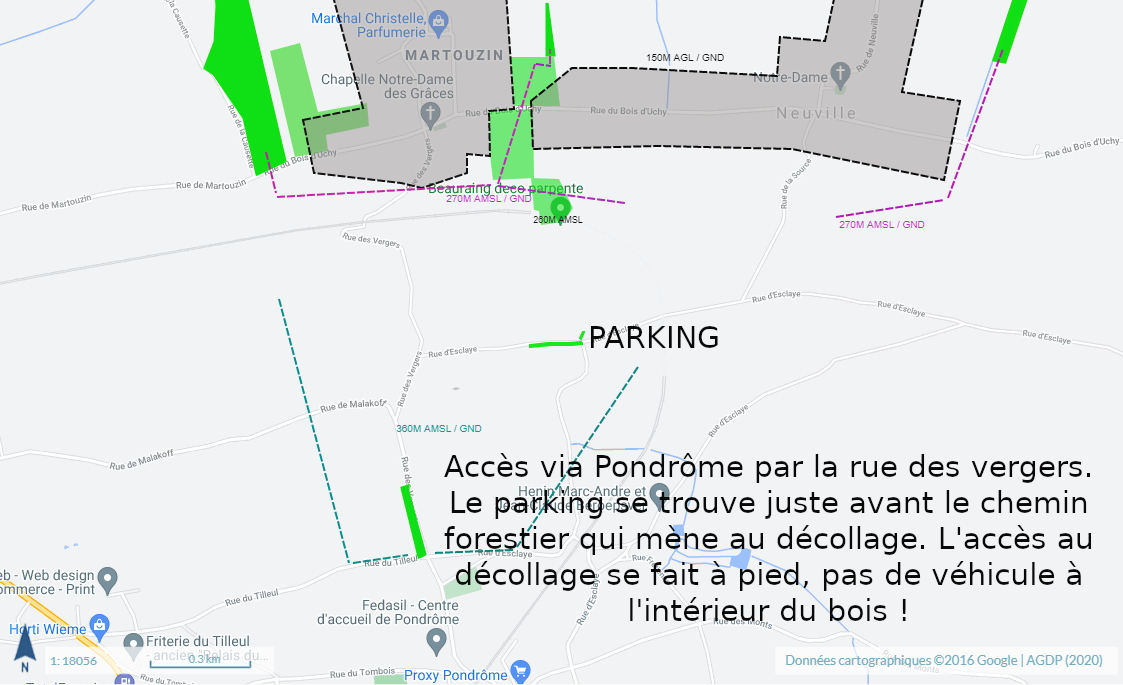 Acces via Rue des Vergers in the village of Pondrôme. The parking is situated just before the forest road that leads to the start. Access to the start must be done by foot, no cars in the forest !

Park your car behind the start, either on the road from the cemetery of Pondrôme, either on the dirt road on the edge of the forest, just before the forest road that leads to the start (it is forbidden to park or drive further in the forest, except to unload hang gliders). Leave a passage of at least 4 m wide for the emergency services or agricultural vehicles. At the express demand of the local residents and of the municipality of Beauraing, it is forbidden to park at the foot of the site or in the village of MARTOUZIN-NEUVILLE. If this rule is not observed, the municipality will close the site! 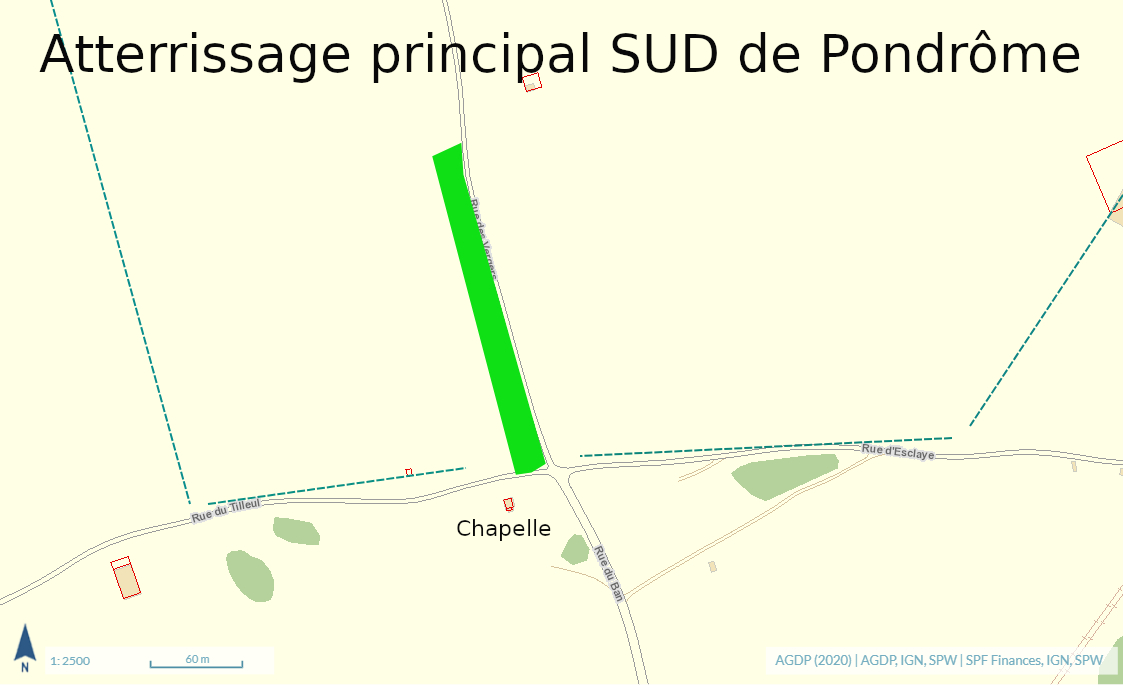 The municipality insists, to limit the nuisance in the village, to land as much as possible on the planned SOUTH landing on the plateau behind the site.

This land commonly called also "chapel landing" is located at the corner of the crossroads and in front of the chapel at the entrance of the road that leads to the takeoff. It is possible to park on the road below the chapel, along the cemetery of Pondrôme.

It is on this field that you will have to make most of your landings during local flights with a goal of 80%. This is a contributing factor to the pilot level required above.

Landing behind a site is not trivial either! Beware of turbulence in strong conditions because the approach, although at a reasonable distance, is downwind of the ridge. Make also sure you have a sufficient altitude not to have to land short in the lee turbulence for the same reasons. 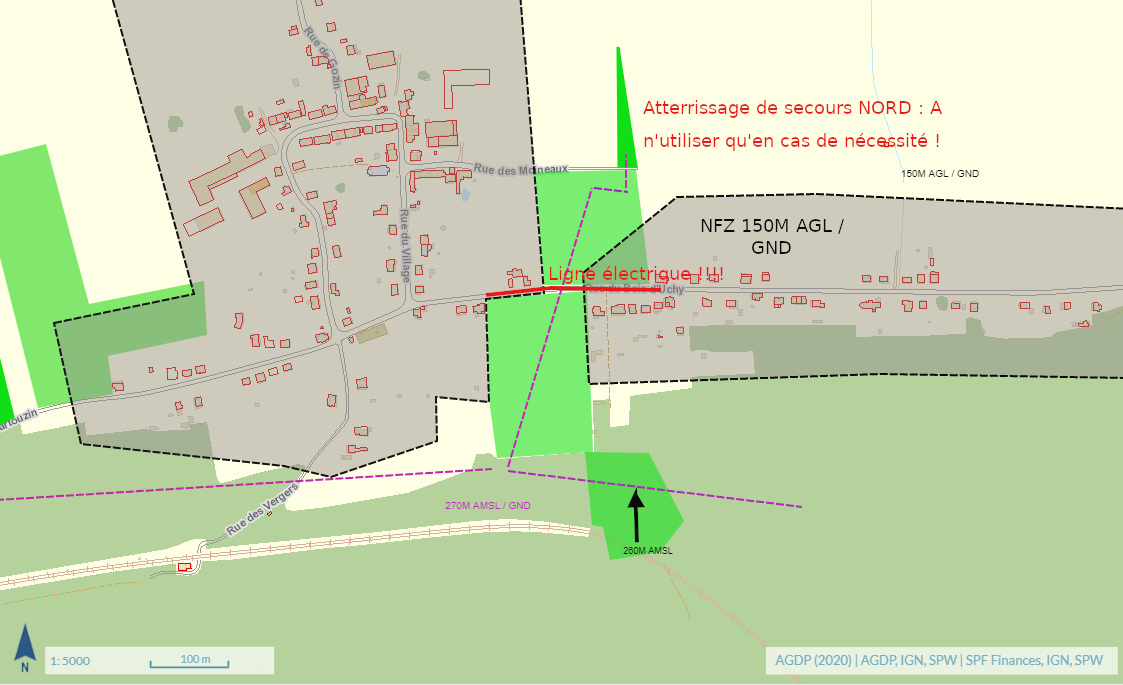 Small triangular landing just in front of the take-off, equipped with a windsock and on the other side of the road at glide-ratio 5 from the take-off.

This field can only be used in case of necessity: landings after straight and “down” glide flights are prohibited!

Landings resulting from a dummy-type flight (test pilot) are allowed but must be carried out sparingly. There should be no more than one pilot per identified thermal cycle.

The following cases are considered as necessary:

A pilot who performs repetitive landings considered as necessary is exposed to a withdrawal of his authorization.

This last case will be aggravated if the landing does not meet the criteria defined by the site rules and the flight plan (NFZ, Low altitude overflight of roofs).

These points justify the pilot level required in the site rules.

This landing is made available to us free of charge by Mr. Paul Lissoir, who just asks to fold on the concrete road or elsewhere outside the field.

The municipality also asks us to leave this landing by the small concrete road that ends in the field itself and not to cross the gardens and fields in order to reach the take-off.

As a reminder, the return to take-off from this landing can only be done on foot! (See plan back on foot).

Do not drive on the access road, except to load hang gliders. In this case, do not drive in the field, so you will have to back up in reverse to get out of this dead-end lane

Do not park on the road or in the village! 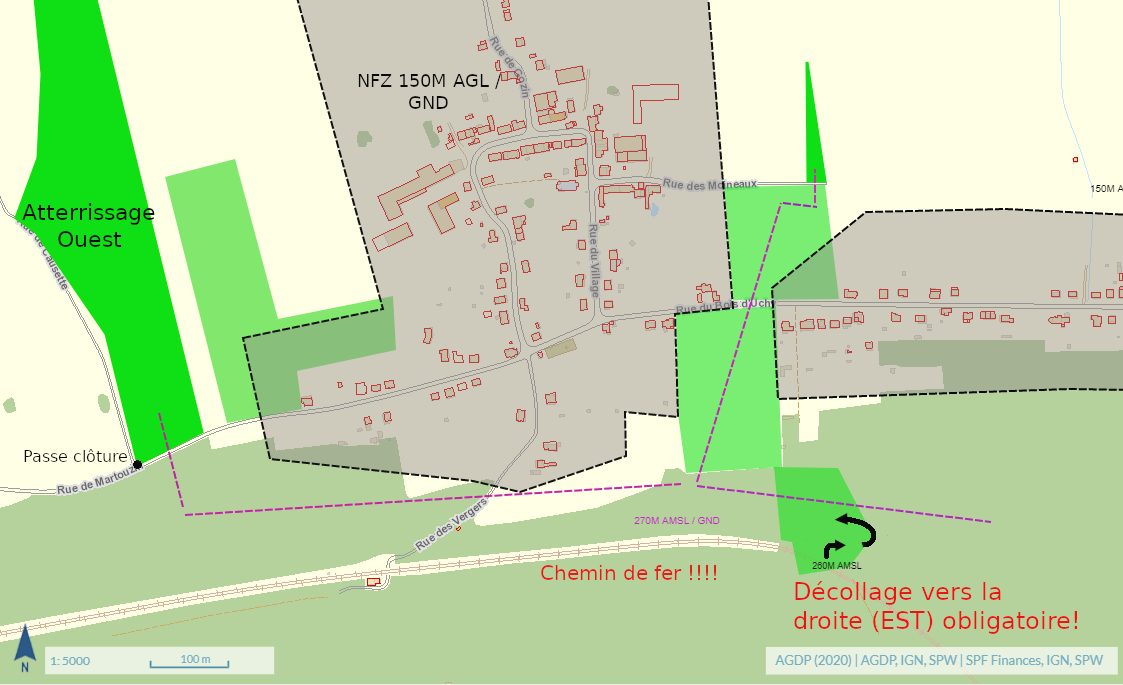 Towards Beauraing and just before the agglomeration of Martouzin.

Attention, it is forbidden to turn to the left (above the railway track) just after take-off! (See Chapter Danger).

This landing at the entrance of Martouzin outside the agglomeration should be preferred when your altitude above the ridge no longer allows you to land behind the site.

Although the theoretical glide ration makes it easily accessible with a slight east wind component (major component when we have NORTH winds), this landing is no less complex and also justifies the level of requirement required:

The exit of the field must be done by the fence pass-over located on the south side along the main road. It is possible to be recovered but not to park there: narrow road where you can hinder agricultural machinery. 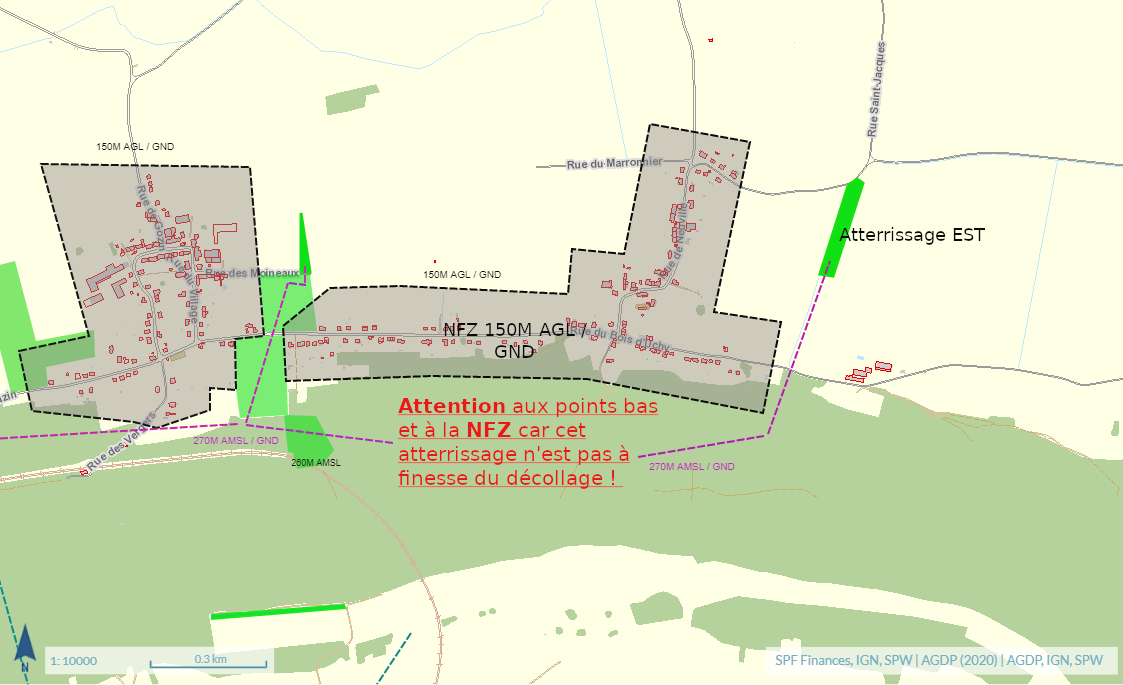 After Neuville and well in the wind of the eastern part of the ridge in the direction of Focant.

Be careful this landing is not reachable on glide ratio!

This landing is a major issue in the context of negotiations and the maintenance of our activity because of its situation which is just in front of the only possibility to where the current take-off could be moved.

It has the advantage for pilots who exploit the EASTERN part of the ridge to be able to make a landing at the bottom of it and this without taking the risk of having to fly over the houses or fly in the NFZ (See flight plan).

It is also outside any agglomeration.

Flights between the WESTERN and EASTERN parts of the ridge are considered transitional flights. Be careful to have a sufficient altitude to maintain the flight plan.

Low points in the comb between Martouzin and Neuville and attempts at low altitude at this place and at the limit of the NFZ are to be avoided: this type of attempt inevitably induces a penetration of the NFZ and an outlanding !

These last two points justify the required pilot level: low-altitude overflights of Neuville being at the origin of the recent update of the site rules (July 2021). 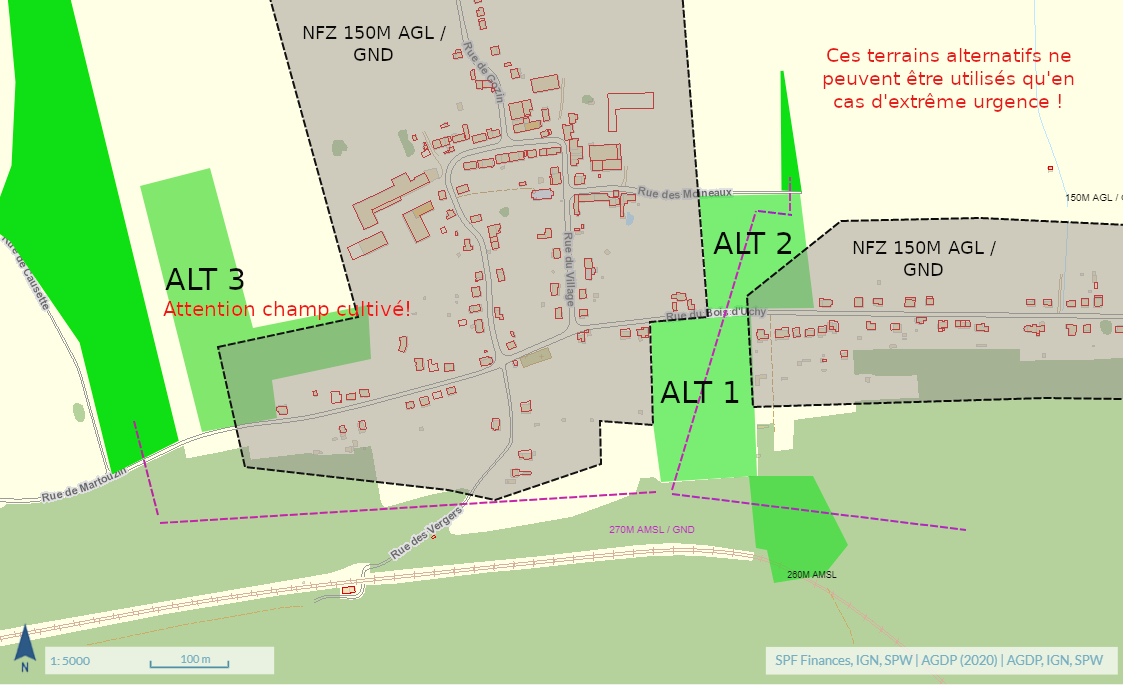 The first alternative (ALT 1) is the meadow below the take-off (leeside of the road), a strategic location in the context of the ongoing negotiations for the future of the site.

This pasture is part of the low-level approach corridor to the main landing.

It is possible to land in case of absolute necessity and will be considered as such:

The second alternative (ALT 2) is the meadow below the take-off after the road, a strategic place in the context of the ongoing negotiations for the future of the site.

This pasture is part of the low-level approach corridor to the main landing.

It is possible to install there exceptionally in case of absolute necessity.

The owner, Mrs. Minet gave us permission to fly over her land and to land THERE EXCEPTIONALLY in case of emergency.

The third alternative (ALT 3) is a cultivated field (Lens) that can be used EXCEPTIONALLY for incident-induced emergency landings during a transition from take-off to the West-landing.

This field is located just before the WEST-landing coming from Martouzin (L-shaped field, see flight plan).

The owner has given us permission to pose there and is also of strategic importance. 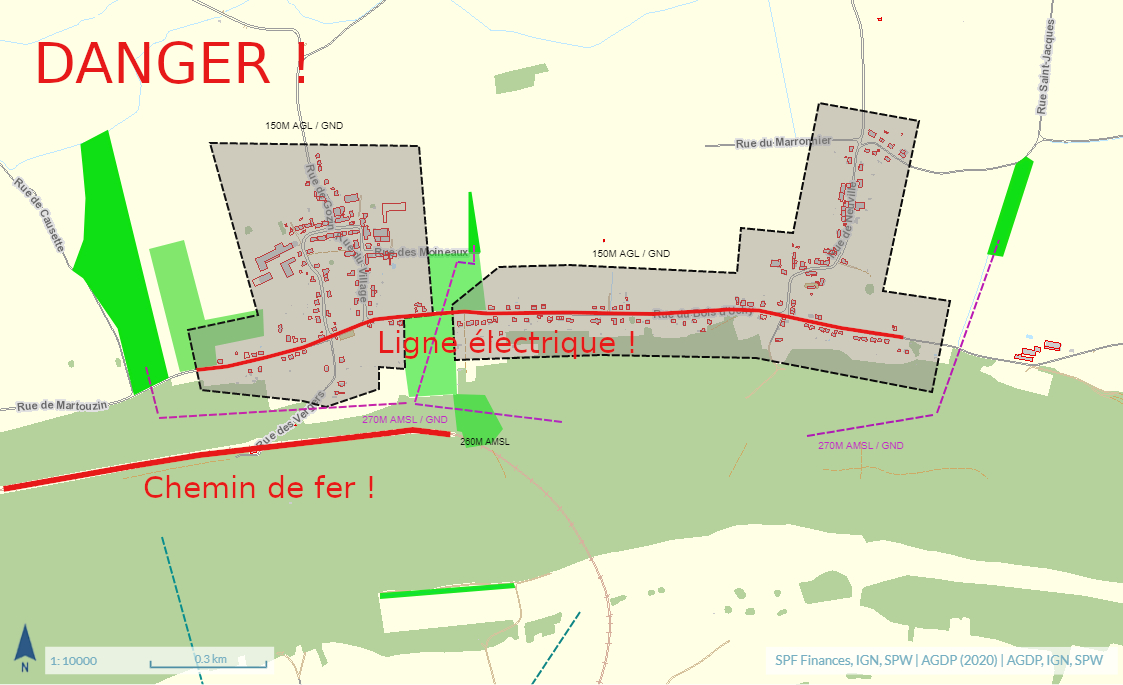 It is FORBIDDEN to fly over the electrified railway at low altitude ! Mortal danger !

Power line against below the ridge, underneath the take-off and along the road approaching the main emergency landing.